After a quick breakfast in Tonopah, NV, we set out for Yosemite. The drive just to the border of NV/CA seemed like forever, but once we got across the border it wasn’t too long until we started seeing prettier scenery. As we entered Yosemite from the Tioga Pass entrance (9945 elevation) well, it just keeps climbing all the way to over 11,000! The climb was a little tough, lots of traffic through the valley, but man, there’s just nothing like Yosemite!!! Just the sight of it calms me.

We got to Wawona Campground about 1:30 and stopped at the dump station first (In hindsight, we should’ve emptied before this trip so we would’ve been lighter, but live-and-learn). Our site was beautiful but, once again, if you want to face the river (and of course we did!), you have to find a way to turn the camper around…not so easy with a bigger trailer and a one-way road. Our site was very unlevel! 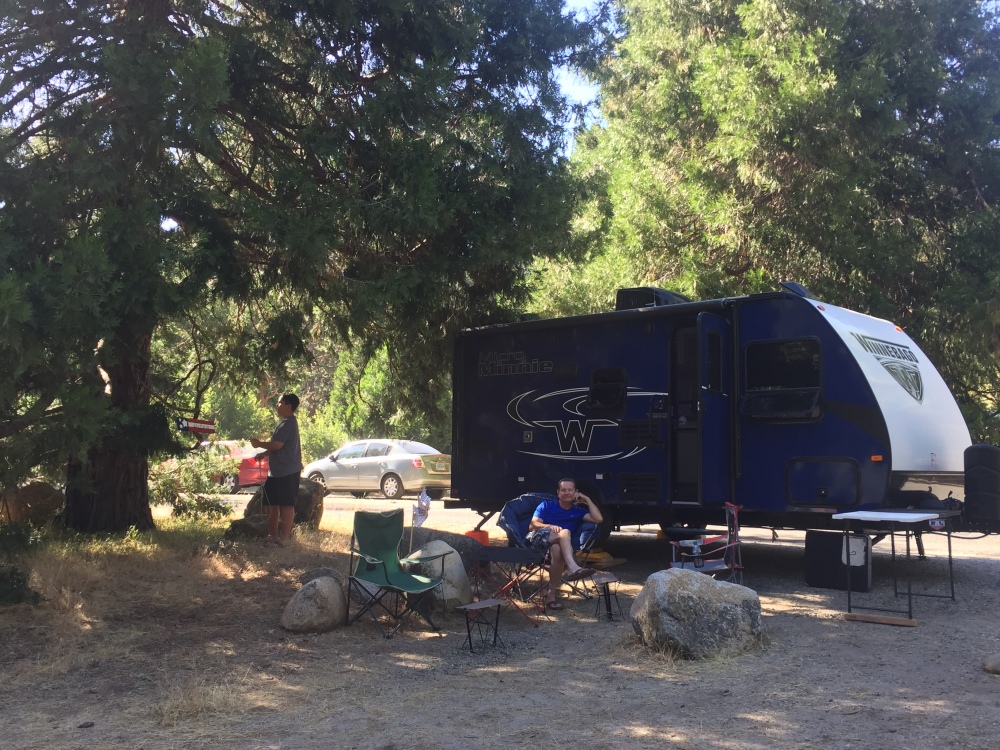 Alan found a rope and occupied himself for hours trying different things and throwing it in the river, then creating his own little space under the tree. I love this part of camping, the creativity that comes out when we unplug! The rope and football also got stuck in the tree but that just allowed Dad to be a hero 🙂 We saw a beautiful blue jay land in the tree right above our heads, and a turkey run across right next to us. We’d never seen turkeys here before and the rangers told us they arrived in Yosemite just 3 years ago. 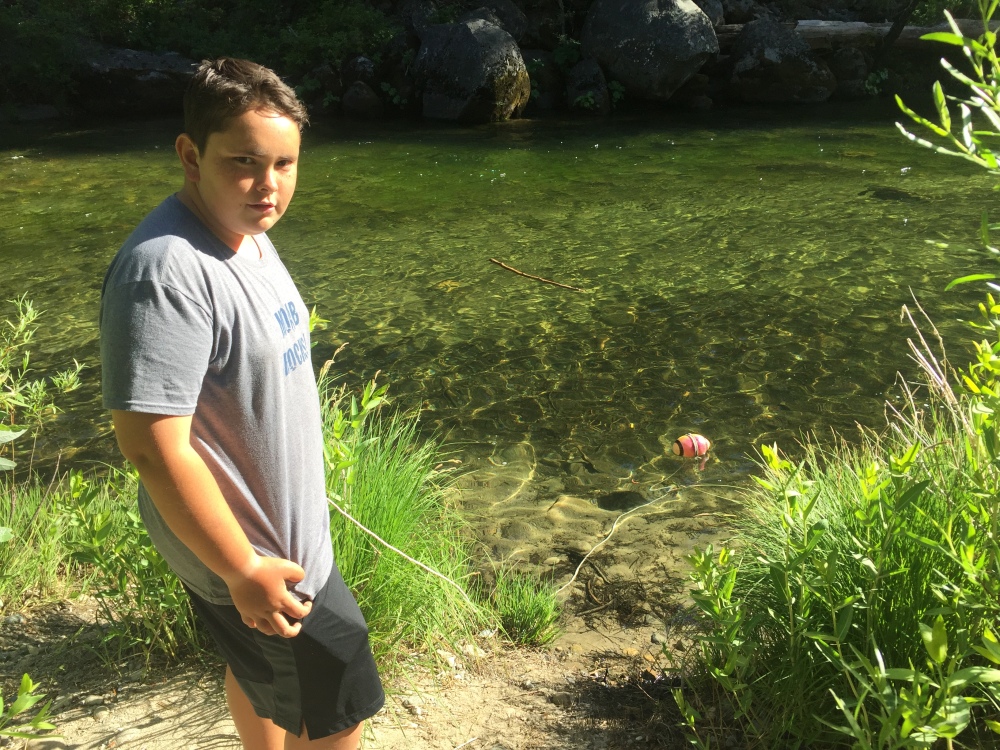 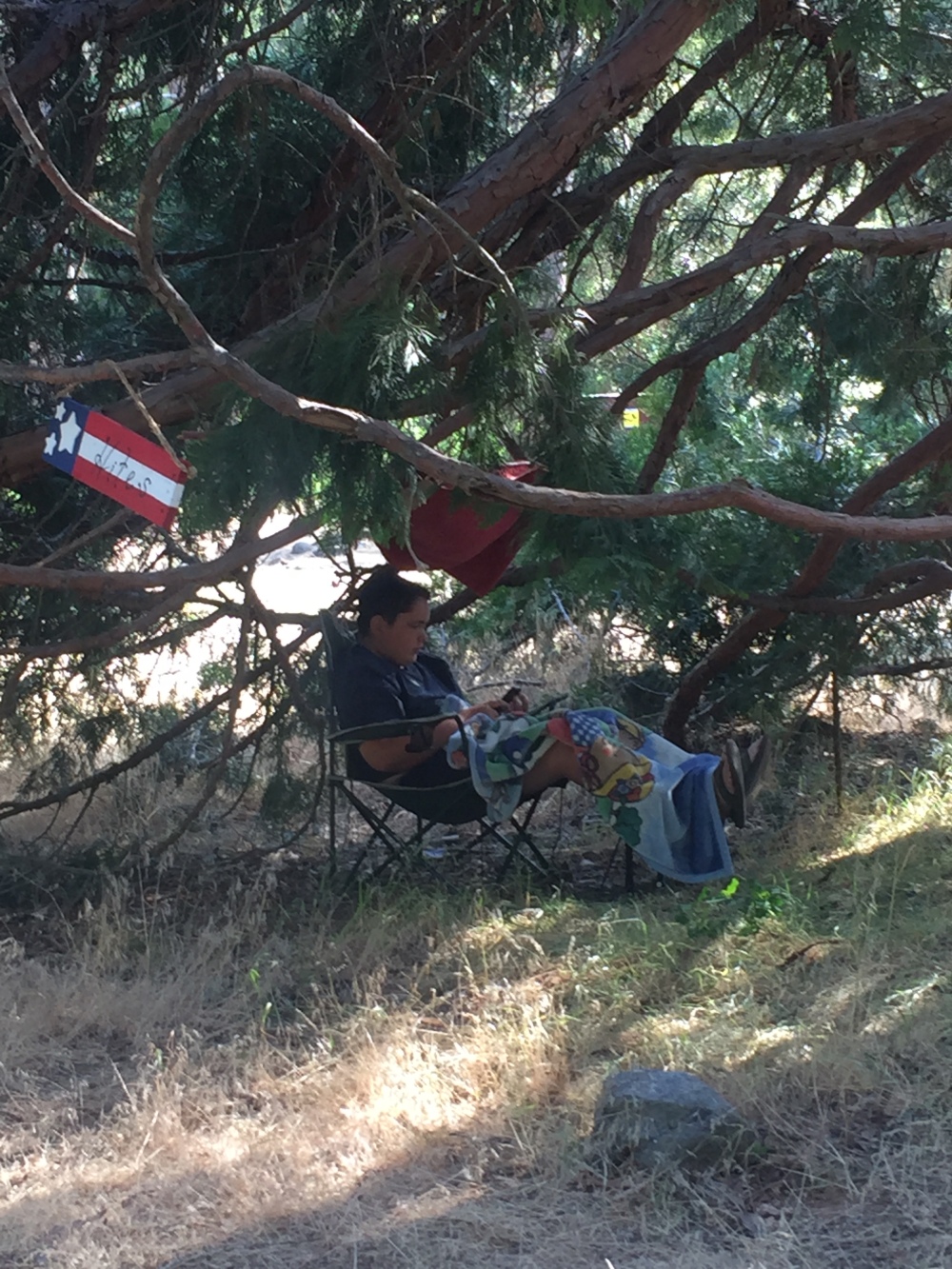 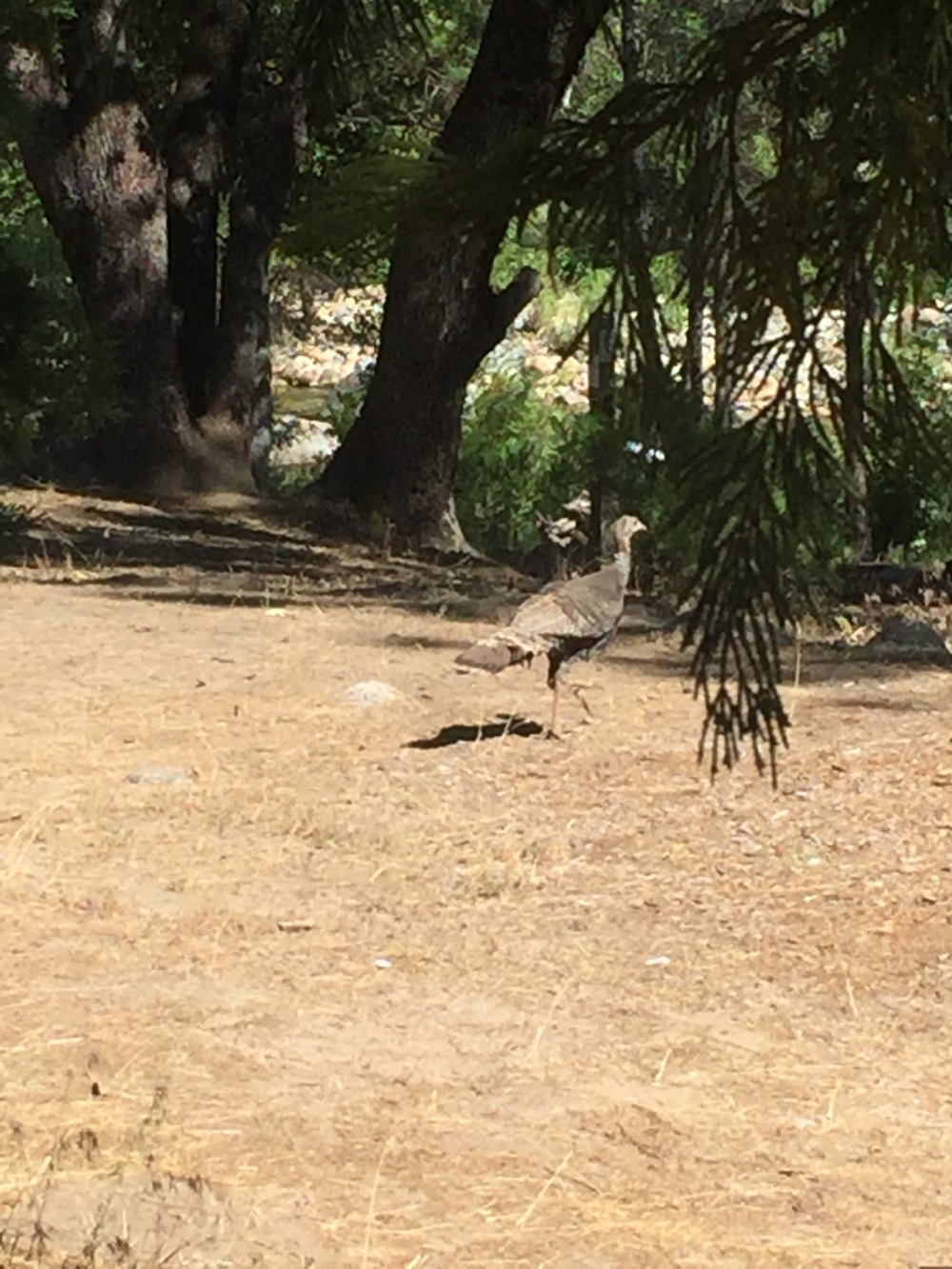 The last time we were here in June 2017 we had our dog Mickey with us. We had just said good-bye to her 2 weeks before this trip, and I wanted to have a little memorial for her. So we went down by the river, in a secluded little spot and sat on a big rock where the water was trickling over the colorful rocks. It was kind of shallow there, and you could see all the beautiful colors of the rocks glistening in the sun. I asked the guys to remember some funny things about Mickey. We all reminisced about our silly girl, like when, at 8:00 PM, she would start heading up the stairs to go to bed, then stop ½ way up and look down at us as if to say, “Aren’t you coming?” “No Mickey, it’s too early.” She’d stare at us for a second, then off she’d go up the stairs to bed. 🙂 So cute. Bittersweet tears. The sun was setting and it was really sweet. 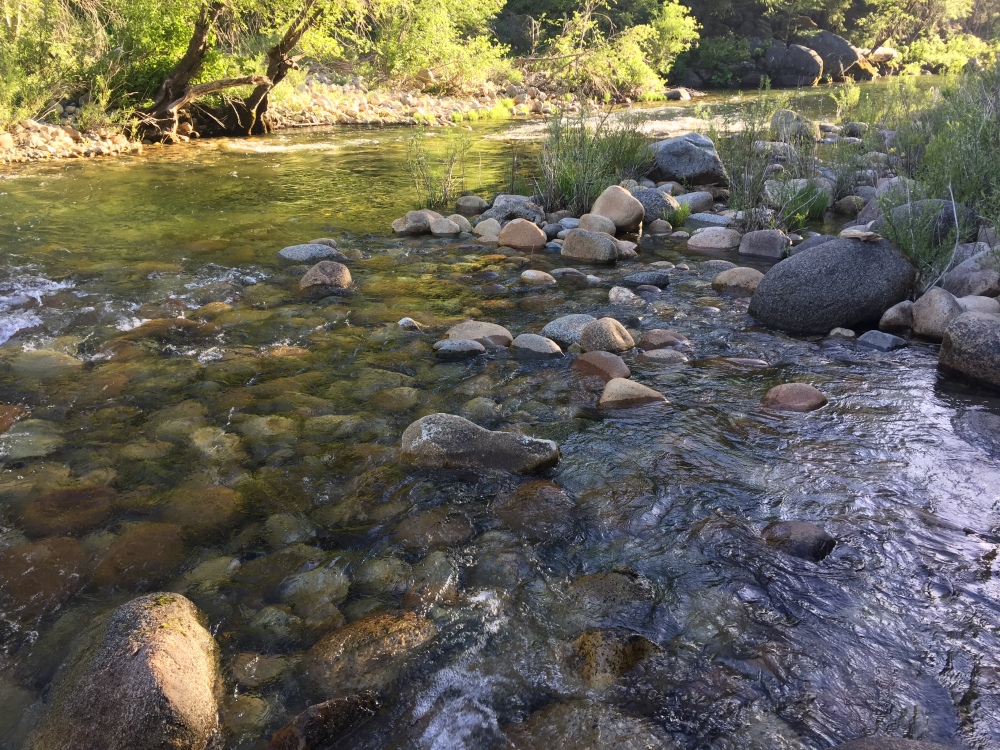 Later on we played the National Parks version of Jenga. The blocks have bits of trivia on them from all of the US National Parks. We had so much fun laughing and being goofy. High stakes here! You can buy it at many of the visitor’s centers but if you’re not going to be at any of the parks soon, here’s a link to the game on Amazon (same price as the parks.) 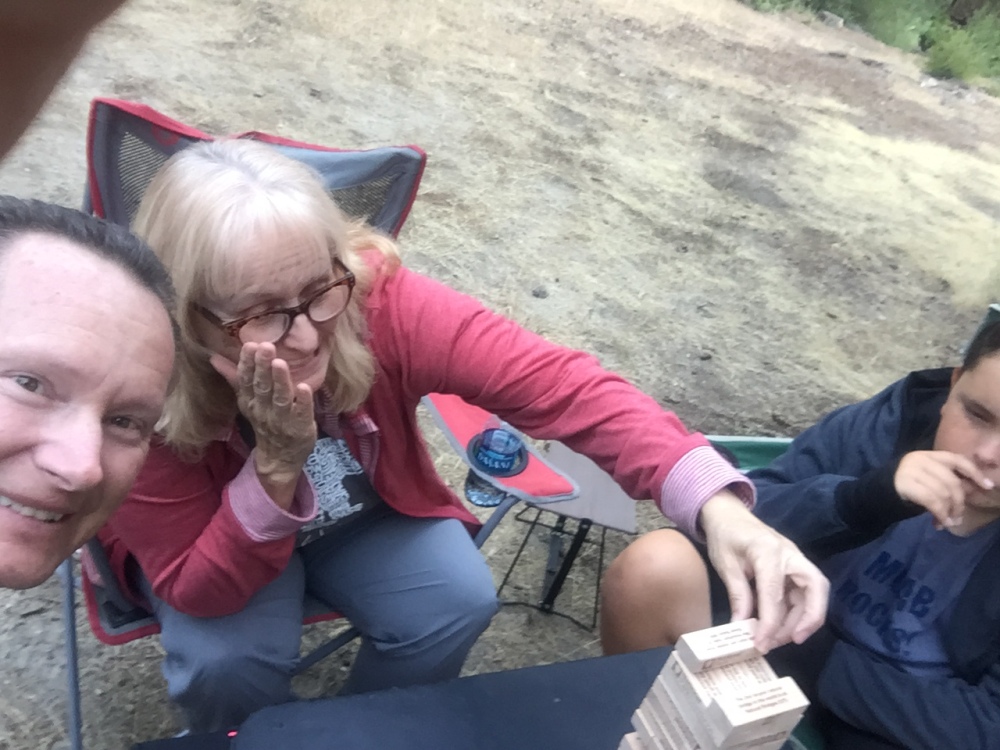 Day Two at Yosemite, Hiking down from Glacier Point :
We had reservations for the 8:30 AM shuttle bus (click here for more info) that left Yosemite Lodge and would take us up to Glacier Point. We left Wawona at 6:45 so there would be plenty of time to get to the valley. After a late start by the shuttle (left 30 minutes late), we got to Glacier Point around 10:15, walked around a bit to enjoy the view, then started our trek down around 10:30. Note in pic below how we are higher than upper Yosemite Falls.

The hike down is 4.6 miles and a descent of about 3,300 in elevation with LOTS of switchbacks, some quite steep and even slippery.

After about a 1.5 miles, one of my knees started to hurt. Then a little further and the other knee started to hurt. As we went on, it got worse and worse until every step was excruciating.  But, there was nothing to do but keep going! 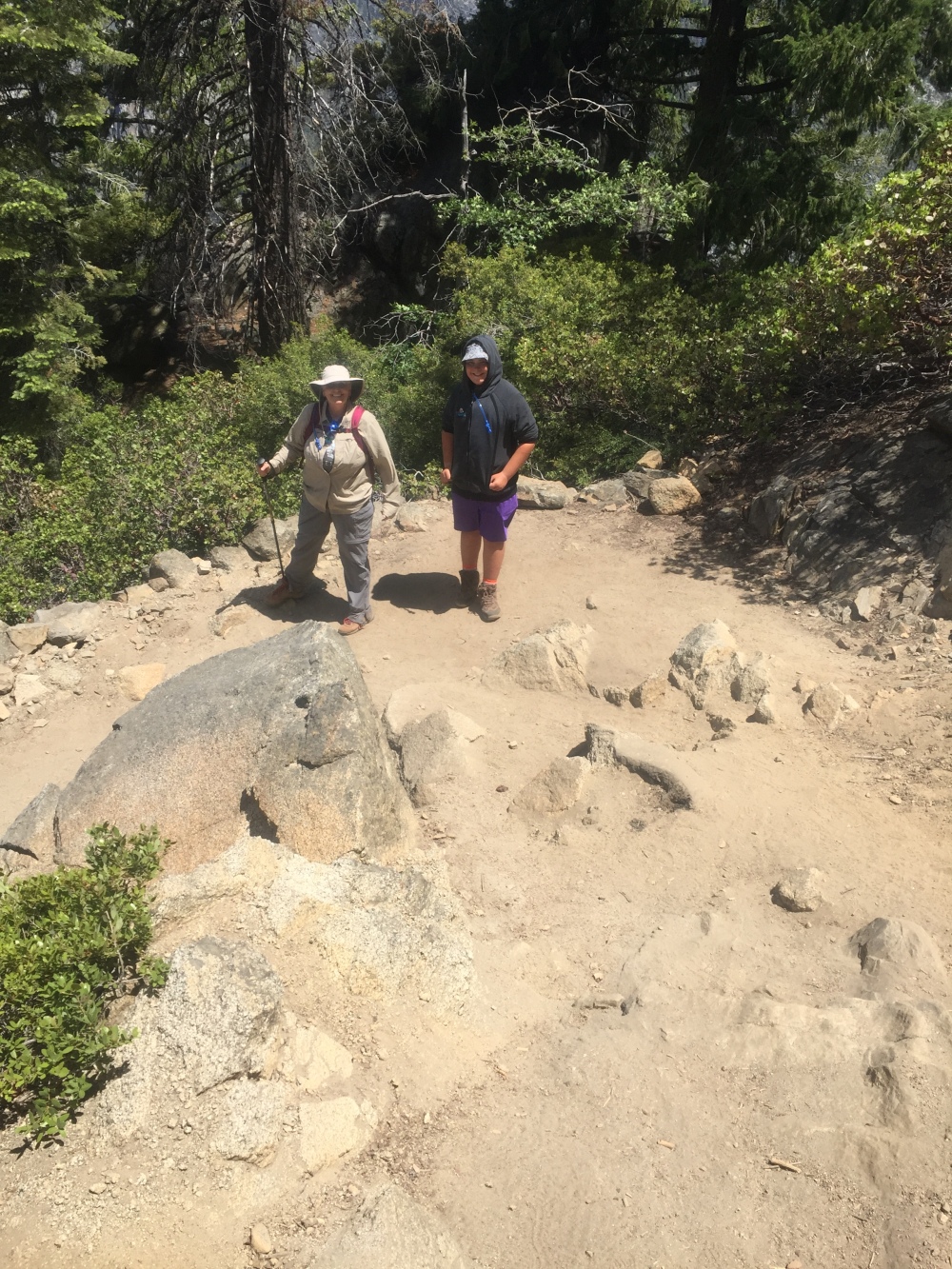 I felt so bad for the guys having to go so slow for me. And I wasn’t fatigued at all. That was the frustrating part, I wanted so badly to go faster, but I just couldn’t. Sometimes I’d  only go about 200 feet or so and would have to stretch again, as stretching seemed the only thing that would allow me to go on. When we still had about 1,000 feet more to descend, the Valley still looked SO far away. I had to hang on to Scott most of the last 1/3 of the walk. 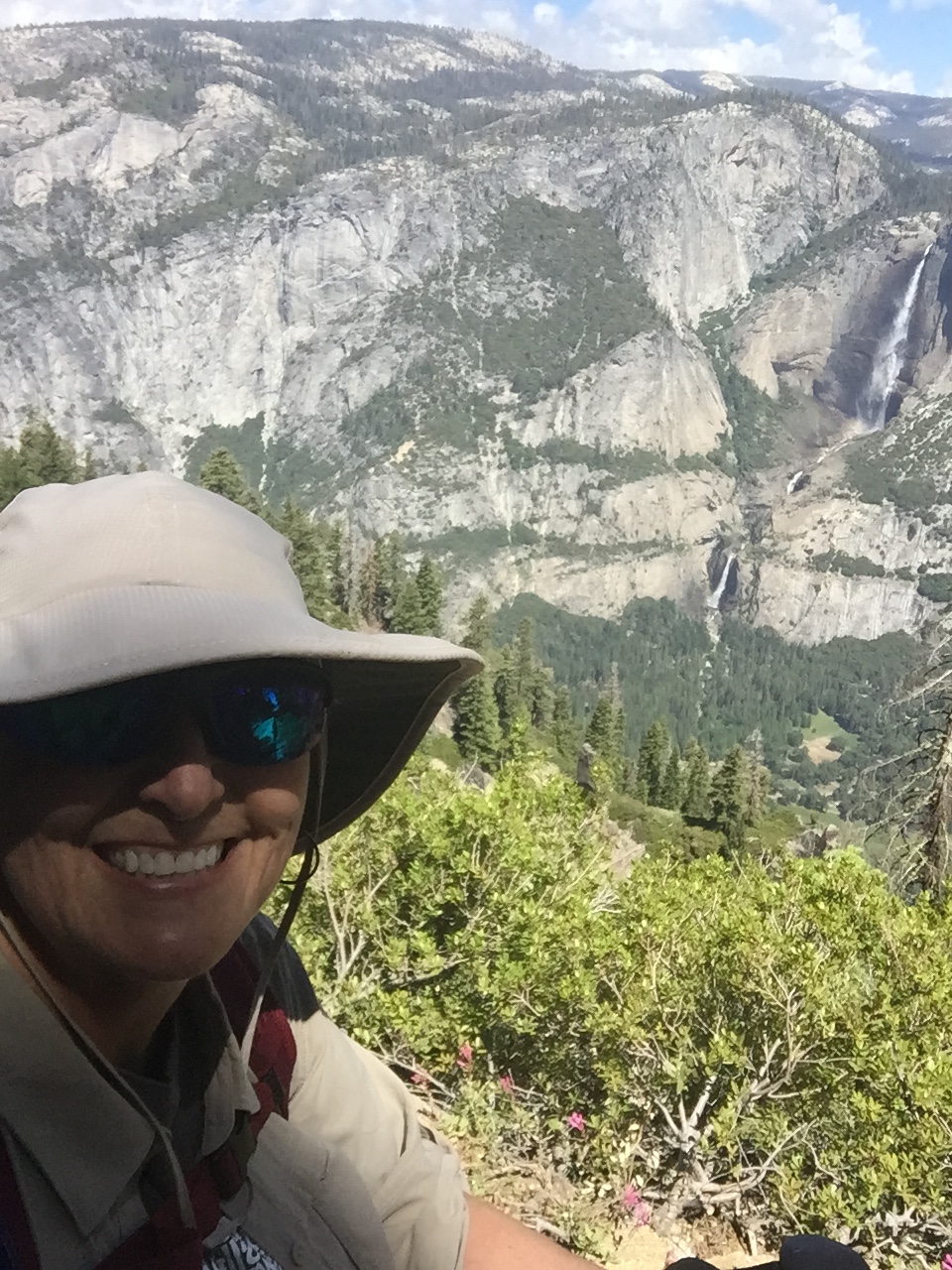 But really, it was SO beautiful and that helped to distract me a bit.

FINALLY we made it to the bottom! Once I was on flat ground, with no more pounding, I could walk fairly normally. Despite all this the views were phenomenal! It was a cooler day, probably a high in the low 60’s, and a few times the clouds rolled in and it got very windy and cold. My guys were SO supportive through this whole day, even though it must’ve been very frustrating.

I ALSO had to go the bathroom so very badly (tmi?), so when we got to the bottom at the shuttle stop, I walked to the nearest bathroom down the road. This resulted in us missing the shuttle so we had to wait another 30 minutes. ☹  If you go, be sure to check the shuttle schedule for the time of year you are visiting. During the winter this stop isn’t even on the route so you’d have to walk further. That night I iced my knees, and a few days later I noticed my toenails were turning black. I ended up losing both big toenails about 6 weeks later. (Result of “trauma” to the nail from constant pressure on the toes.)

We took the shuttle over to the Visitor’s Center area so I could buy the usual goodies, then we took the shuttle back to Yosemite Valley Lodge where we visited Starbucks and got refreshed with coffee! Aww, so good! The guys had eaten snacks on the trail but not their sandwiches, which they ate waiting at the shuttle. I only ate ½ my sandwich on the trail…not the best idea but I was focused on just getting down…so I was kinda shaky.

After we got back to camp, Scott made Alan & I pizza and he had pulled pork. Then we relaxed and watched Amazing Grace (a great movie, by the way!) So tired, but feeling accomplished, we all slept well listening to the sound of the beautiful Merced River.

Day Three at Yosemite – Relaxing at Wawona:
Since this was our last day and we’d been so busy, we decided to just relax at camp.
Scott made us some delicious apple cinnamon pancakes from a cast iron cookbook we bought. He adapted it a little and used pancake mix. They were SOOOOO good that now they’ve become a camping staple. Here’s the recipe if you’re interested.

We needed a few things from the General Store, then I remembered that Mariposa Grove had just reopened after a nearly 3-year reforestation project, and it was just a few miles away. Unfortunately, the lot was full so they stopped allowing entry. They suggested we come back a few hours later which we did, but still couldn’t get in.

It was just as well as we had a great time relaxing and exploring back at camp. Today was warmer than the previous day at around 75 but the water was just too cold to stay in for long, so the guys both played in the (COLD!) river, and I enjoyed wading and relaxing on the little “beach” …a beach that wouldn’t exist if the water had been higher like last year, so it was really nice, and there were still rapids in certain spots. 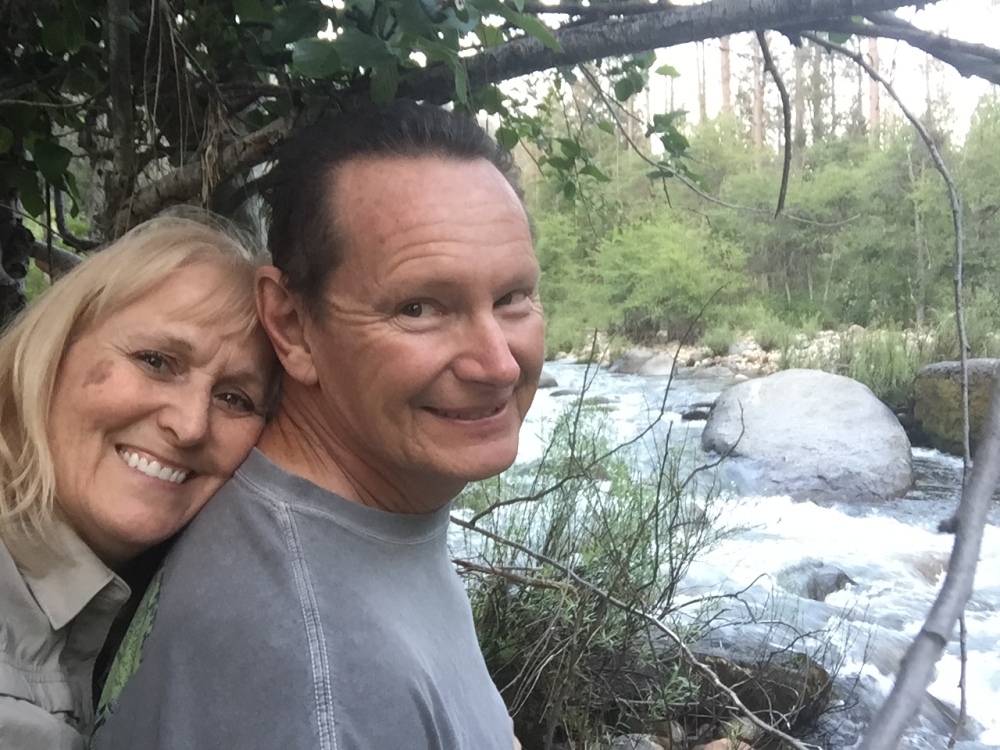 Once again, Yosemite didn’t disappoint and once again, we had to (temporarily) say good-bye. Someday we hope to participate in one of their volunteer programs where you stay in the valley for a month or so.

Have you been to Yosemite? What’s your favorite place to stay or explore? Let me know!