None of us had ever been to Yosemite before, and this was only our 2nd camping trip ever. My dear Dad had lived with us for about 12 years, and the last several years of his life were very difficult. After several months of hospice, he passed away in late April 2016. I’m grateful for his long life (he passed away at 98) and for the time I was able to have with him. He was a very funny, loving man who, along with my mom, raised a beautiful family. But anyone who has been a full-time caretaker also knows it is very difficult and drains you emotionally and physically. I mention this because it sets the stage for where we were emotionally before this trip. We were ready for rest, renewal, and rejuvenation.

We left the 100-degree heat at home and headed towards the most eastern entrance of Yosemite, Tioga Pass. Even before we entered the park, we were impressed with the beauty of the land. There was still snow on the ground, so we had to stop and play a bit. My dog Mickey really enjoyed the snow, or maybe she was just excited about getting out of her kennel to frolic! 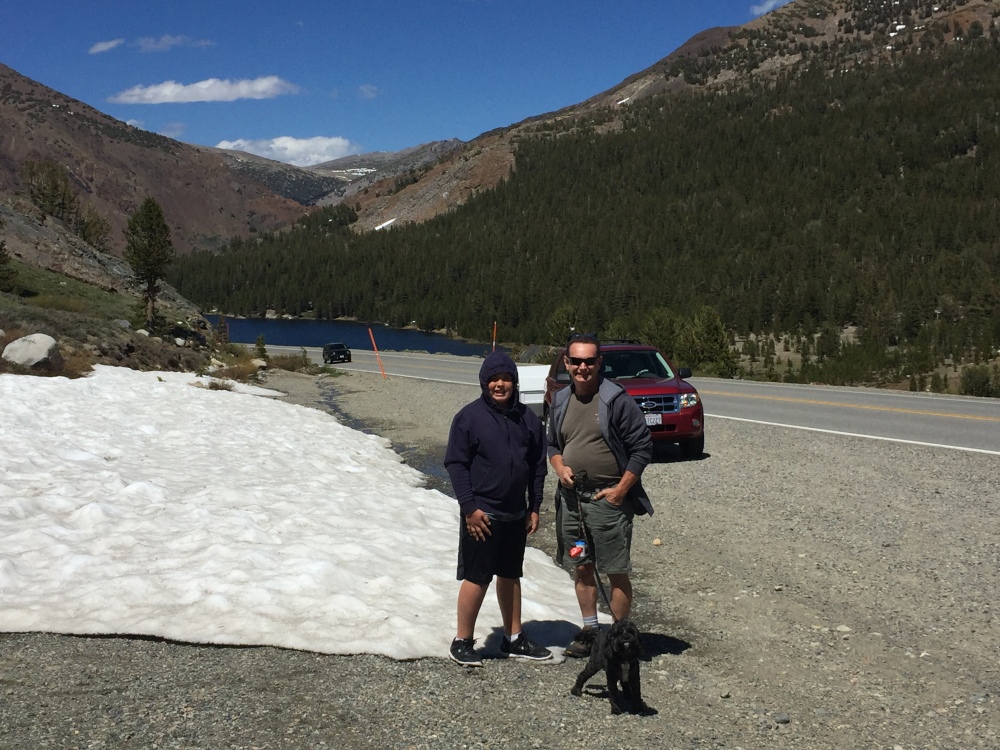 At the entrance, the ranger welcomed us and then said, “Enjoy Your Park!” My heart nearly burst out of my chest!  I was giddy!

Our reservations were at Crane Flat, which is on the West side of the Park. It’s ironically named because it’s anything but flat! We were in site 428 at the end of the loop facing the forest, definitely on a slope but not as bad as some of the other sites, and the bathroom was only about 4 campsites away. We set up camp and settled in. It was really beautiful! 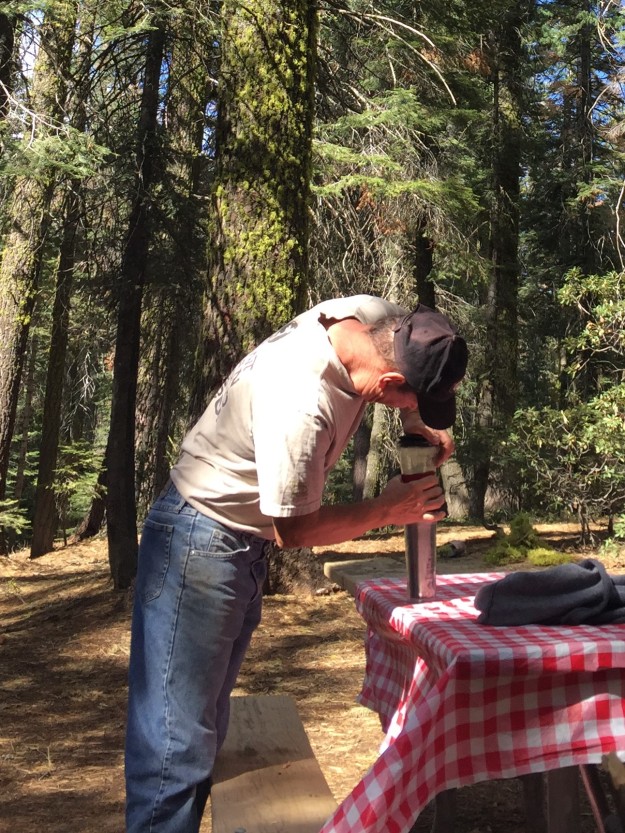 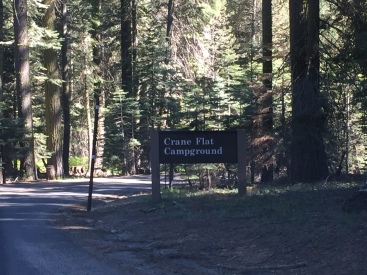 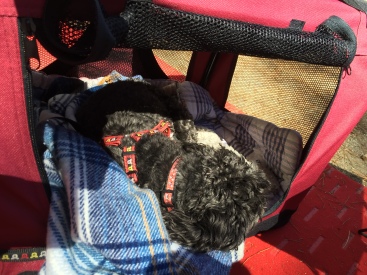 Sunning in her bed

Crane Flat Campground is about a 40-minute drive into Yosemite Valley but we really didn’t mind as the drive is beautiful, and includes going through Tunnel View, a must-see! On the days we went into the valley, we went in early (before or close to 8:00 AM) and left after lunch so we could relax at camp. There’s a general store and gas station right at the entrance to the campground. It’s also at a higher elevation (6,200 feet) than the valley, so the afternoons were very pleasant. However, we didn’t anticipate how low the temps would get at night and we didn’t have a heater in our PUP. The 1st two nights were probably in the 40’s. Brrrr! Good thing we had warm comforters on our beds!

There were quite a few deer in the area, and several even came right up to our site. One group apparently tore up our tablecloth while we were away. At least we ASSUMED it was done by the deer. Our neighbors said they saw deer there when we were gone.

We had our dog Mickey with us and there are certain places in Yosemite where you can’t take your dog. They are welcome on most paved trails, but not on dirt hiking trails. Be sure to check ahead of time when planning your excursions. Since it was our first trip to Yosemite, we found plenty to do with our pup.

Crane Flat Lookout is less than 2 miles away. You can hike there but we drove up. After you park, you walk up a short trail that leads to a 2-story lookout tower where you get a 360-degree view. Not a lot of people come up here – we were the only ones there except for staff – and it was breathtaking! 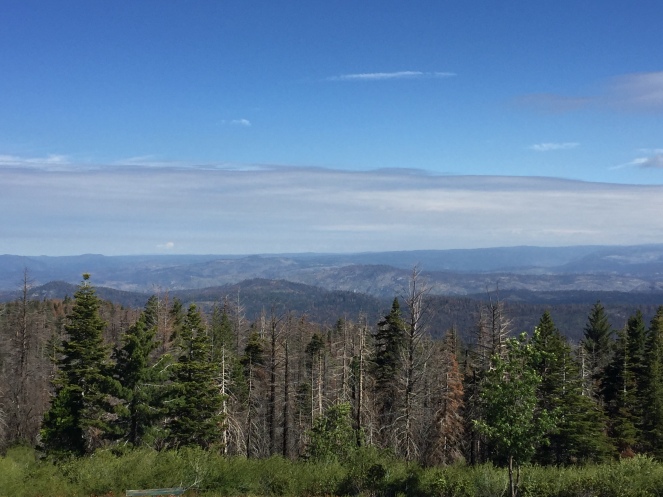 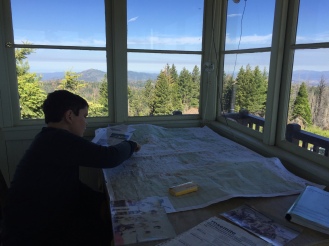 One thing we had to see up close, Yosemite Falls! The walk to Lower Yosemite Falls is and easy, paved, 1- mile loop, and dogs are allowed. The falls were full in mid-June and it was spectacular! At the base of the falls is a bridge that goes over the river. You can walk beyond this a bit further until it turns into a dirt trail where you can continue your hike (but again, no doggies beyond the paved trail.) 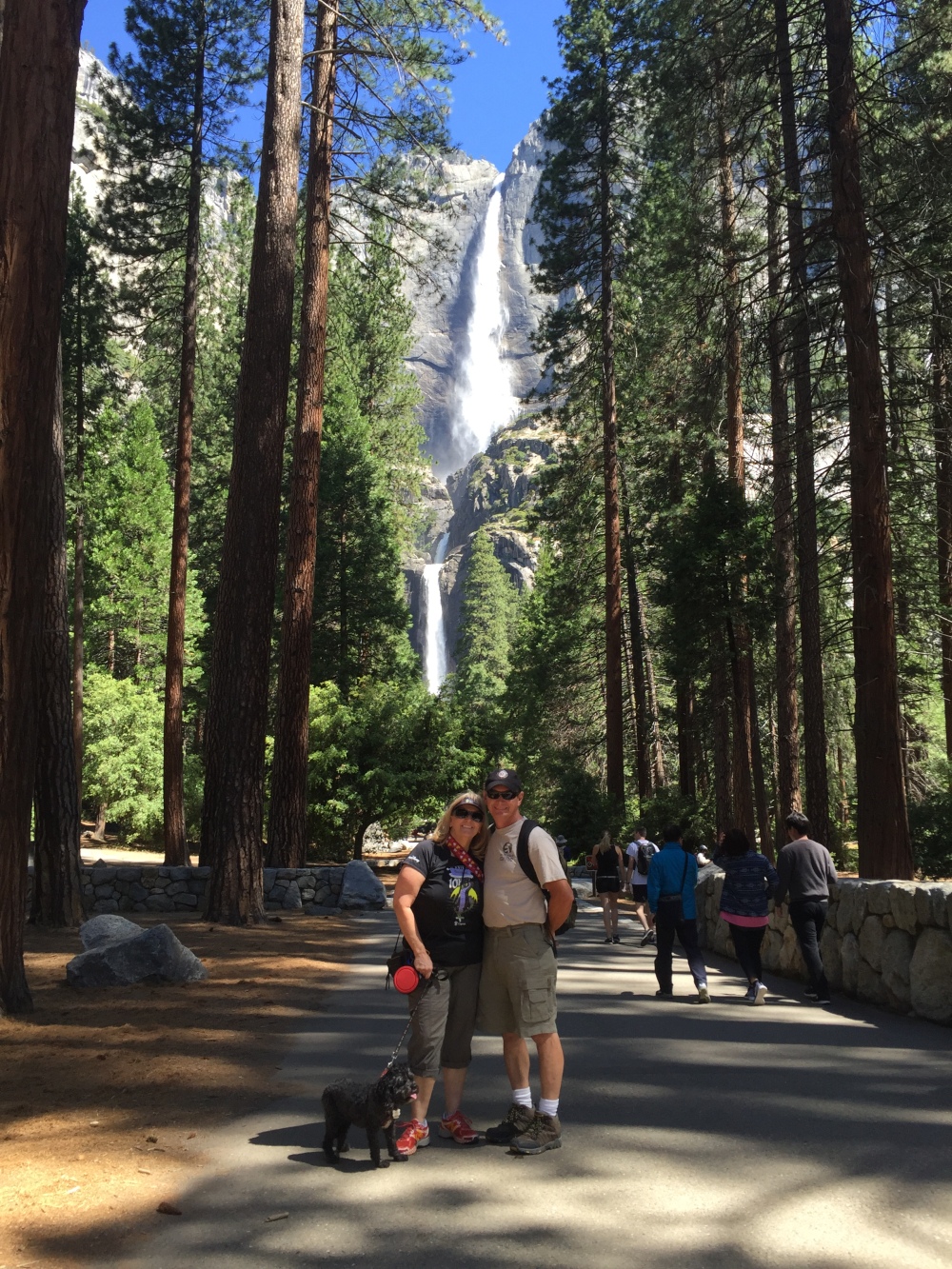 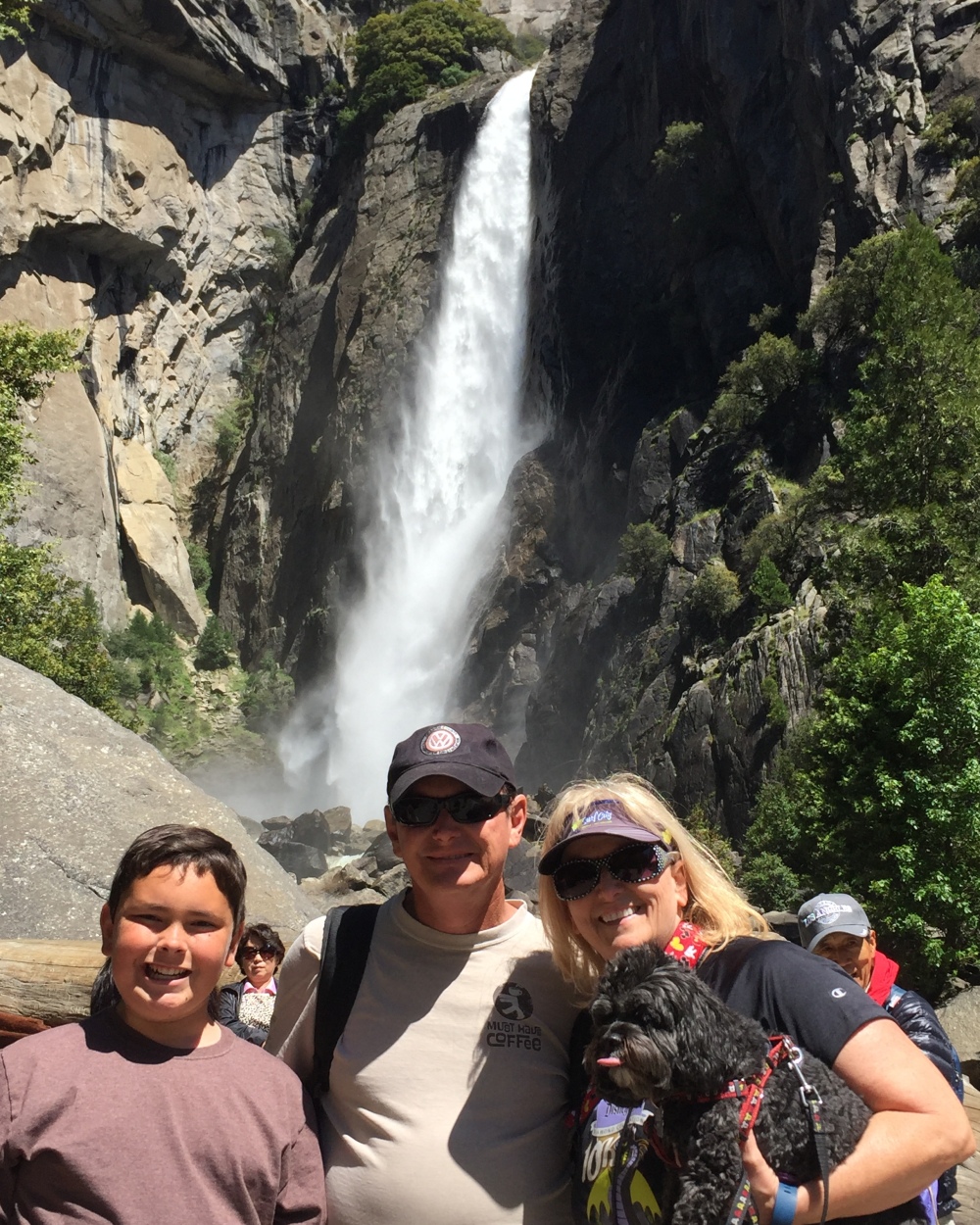 Another stop in the valley was Bridalveil Fall. -The walk is fairly easy, a little over 1-mile round trip, and a beautiful trail along the river. There are signs everywhere warning you to be cautious on the rocks as they could be deceptively slippery. At the base the mist was quite heavy and it was a cool morning, but the sun was out and we loved it. Dogs are allowed on this paved trail. 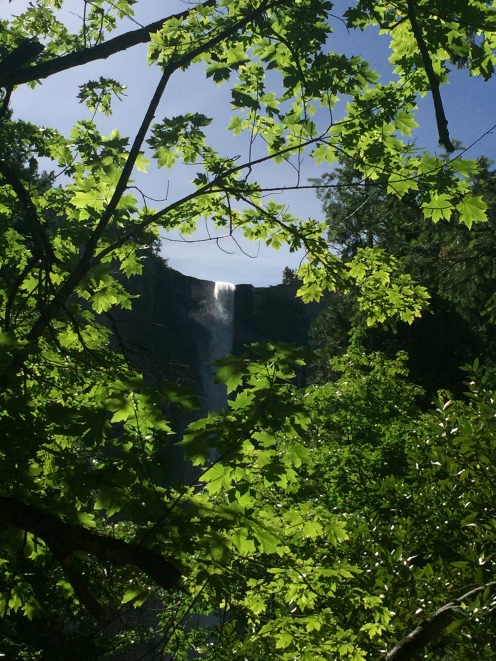 One of the most fun things we did was our swimming at Rainbow Pools, about 30 mins away from our campground in Groveland, a much warmer area than Crane Flats. We wanted to find a place to swim sometime during our trip so I had researched this beforehand. The water was REALLY COLD but it was a warm day, close to 90 degrees. It’s a big swimming hole that includes a waterfall that people jump off of into the pool. Too much for me, but our 11-year old son did it! Unfortunately, he forgot about how to land and did a belly flop! Poor kid. It knocked the wind out of him, but he was OK and it turned out to be a very memorable excursion. Parking was challenging. I’d recommend getting there before noon instead of the afternoon like we did. We had to walk quite a distance from where we parked up the road. Also, this is a natural swimming hole – no lifeguards or staff – so play/swim responsibly. We tried to balance each day with sight-seeing and relaxing at camp. During our time in the valley we also saw Half Dome and El Capitan from a distance (hard to miss!) but President Obama was also visiting this week and they basically closed down the valley for his visit which limited our time there a bit.

On our drive home we took the South entrance/exit and went to Sugar Pine Railroad. I had been here when I was about the same age as our son, and we thought he’d enjoy it. And yes, dogs are allowed on the train too! One really fun thing we learned is that the steam engine was made in Lima, Ohio where my husband was born! They also had a little gold panning experience which our son had fun doing. I’d definitely recommend buying tickets and making your reservation online BEFORE your trip. 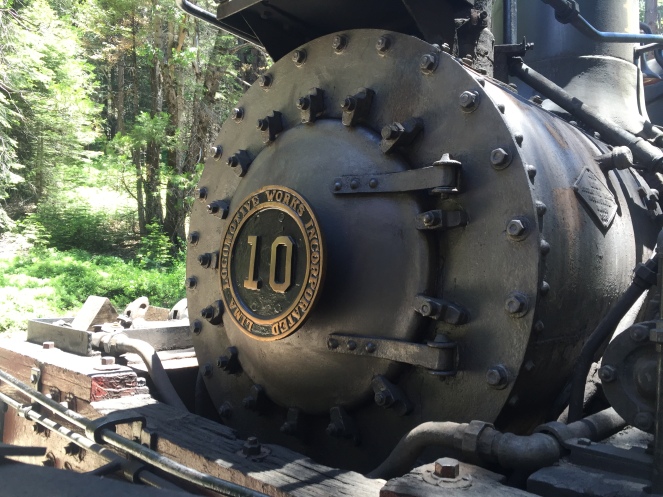 We are now forever Yosemite lovers and can’t wait to return. This was a trip we will never forget! 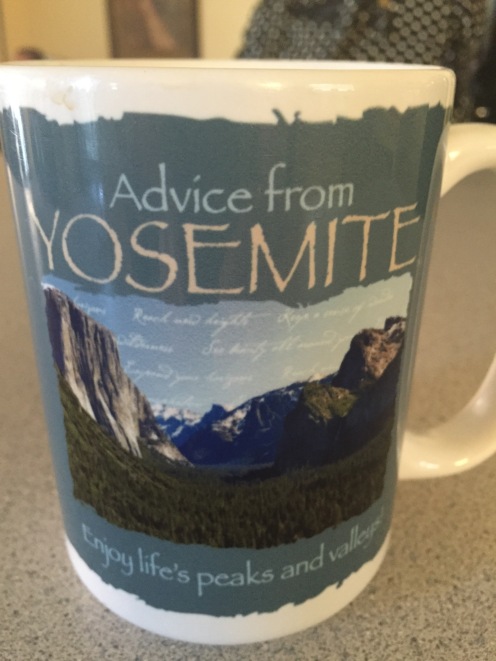